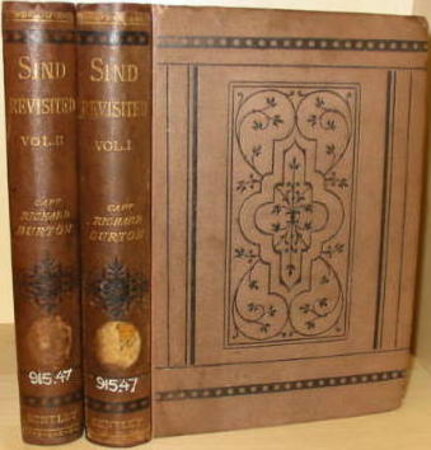 Sind Revisited: With Notices of the Anglo-Indian Army; Railroads; Past, Present and Future, etc:

London: Richard Bentley & Son, 1877. First Edition. Two volumes. Original cloth with border on front cover enclosing a black stamped floral resign. Lettered in gilt. Re-cased. The binding is a little faded and soiled, but overall in very good condition. Library number in white, and remnant of a contemporary library sticker to the base of each spine. Internally, largely clean and tidy, but with a little darkening to the edges and occasional light foxing. This is an ex-library copy, and although there are not many library marks to the book, there are a few. Namely: Vol. I. Number to half title; discolouration from removed sticker to the verso; small (2cm diameter) circular library stamp to the title page. The end papers in Vol. I. have been replaced from old, contemporary black end-paper stock.
Half-title to Vol. I., not called for in Vol. II. xii, 343; iv, 331. pp. Initially Burton had written a report on the Sind and its population in "Reports on Bombay" in around 1849, hence the "revisited" here. Burton intended that this much updated text on India after the mutiny be illustrated with a map and photographs taken on this 1876 journey with Isabel. However, his publisher returned the map and photographs he had sent them, as he considered that the expense would be too great.