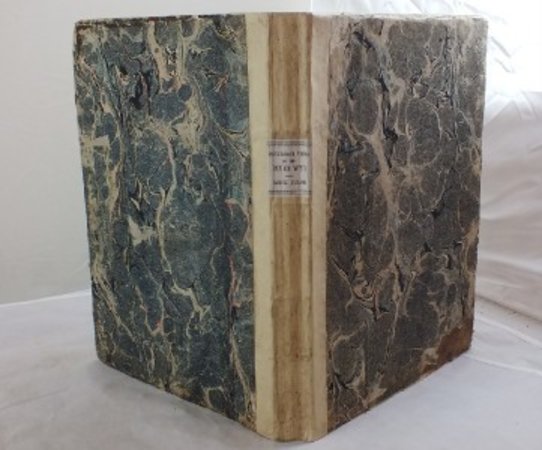 Picturesque Views on the River Wye From its Source at Plinlimmon Hill, to its Junction with the Severn below Chepstow; With Observations on the Public Buildings, and other works of Art, in its vicinity

London: R. Faulder: 1797. Quarto, Large Paper Edition. Bound in period marbled boards, edges untrimmed, spine neatly re-backed using plain paper in period style with printed label. The text is complete, meeting collation: xii, 159, [1]pp, with halftitle, includes frontispiece map, portrait plate and 28 of the 30 other sepia aquatint plates present. Lacking 2 plates: pp. 129 St Briaval's; and pp. 146 Chepstow Castle and Bridge. 28 Sepia Aquatint plates (of 30). Ireland, printmaker and writer, had pursued a parallel career as a draughtsman and engraver. He was awarded a medal by the Society of Arts in 1760 and exhibited a drawing at the society's exhibition in 1765. In 1768 he became an honorary member of the Royal Academy of Arts, and in 1784 he exhibited there a view of Oxford. During the 1780s he etched many plates after William Hogarth and others and produced a number of portraits and architectural views. Ireland was one of the victims of the notorious Shakespeare hoax in 1796 (later shown to be the work of his son, William) but was rather unfairly blamed for this himself. His credibility with the public suffered as a result and it is said that this was reflected in very low sales of his Views on the Wye when it was published the following year, leading to the comparative rarity of the first edition

Condition: The binding is holding firmly and is in good condition, with some general wear to surface / extremities from handling, corners bumped / abraded. Contents are holding firmly and in very good condition, with just occasional scattered spots or handling marks, a few creased corners, extreme edges a little nicked / browned at points and with a few water stains to margins of the final four leaves, otherwise a nice copy. Replacement plain end papers, recto of final leaf and lower end paper with small brownish stain toward base. Sadly this copy lacks to plates, but on the plus side it is the scarcer Large Paper Edition.