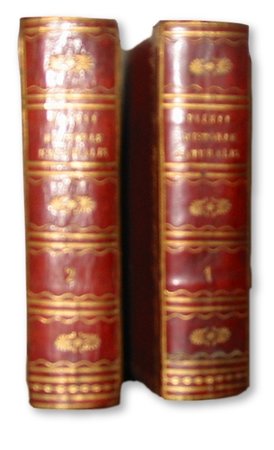 Amsterdam: Lugduni Batauorum ex officina Elzeviriana: 1635. First edition. Edited by Joannes de Laet. A lovely contemporary dark red Morocco binding. Fine roll of gilt flowers to each board. Gilt decoration and titles to the spine. Blue marbled endpapers. First volume with fine engraved title depicting all the elements found in Pliny, Elzevir's small woodcut device on other titles. small woodcut portrait of the author within roundel on *8 verso, woodcut headpieces and initials. The first volume has the armorial bookplate of George Villiers to the inside front board. The second volume is signed H. Montagu Villiers 1830. {1} pp (xxiv) 654 (xviii). {2} pp. 631 (xvii).

A beautiful example of this binding. The spines are a touch darkened, but the binding is in excellent condition. Internally clean and tidy throughout, with very slight darkening only.
George Villiers (1759–1827) The youngest son of the diplomat Lord Hyde (later Earl of Clarendon), he was an intimate of Princess Amelia and personal supporter of her father, George III. His bookkeeping as Paymaster of the Marines caused a scandal and left him owing the Crown £250,000. He was forced to surrender all his property and throw himself to the King's mercy. His son Henry Montagu Villiers (1813–1861) was a Church of England. becoming Bishop of Carlisle (1856) and Durham (1860).
The "Elsevier Books" are books published in the late XVI – the early XVIII centuries by the celebrated Dutch publishing house belonging to the Elsevier family. The Elsevier dynasty of printers existed more than 130 years and came to the forefront of European book-printing in the XVII century. Its founder was Lodewijk Elsevier (1546–1617) from Leuven who had studied printing art at famous Christophe Plantin in Antwerp. After Lodewijk Elsevier's death, the family business was continued by his descendants from whom the most celebrated are: Bonaventura Elsevier (1583–1652), Isaac Elsevier (1596–1651) and Lodewijk Elsevier Jr. (1604–1670). The last of the Elseviers died in 1712 whereupon their firm ceased to exist.