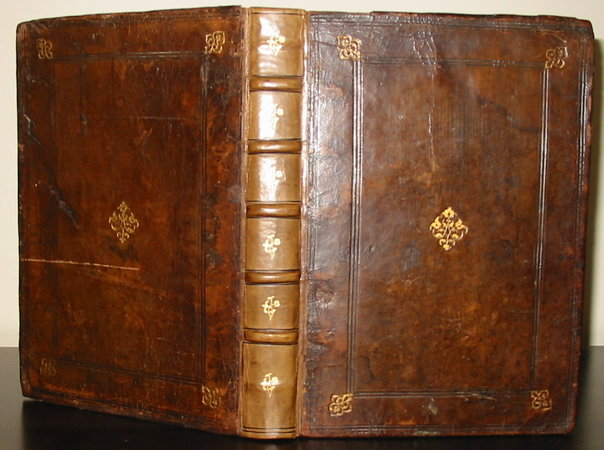 Lugduni [Lyon]: Seb. Gryphium (Sebastian Gryphius): 1552. An interesting collection of works - two of the three having their own title pages. It would seem that these are in fact the constituent parts of Aduersus pseudoeua[n]gelicam haeresim libri seu commentarij nouem, duobus excusi uoluminibus. Which was published in Lyon in 1551. The titles here do not reference this earlier work, but the pagination conforms to Copac's entries. Early, possibly contemporary full leather boards with embossed blind stamped decoration and gilt decoration to front and rear board. A recent spine has been put on the work. Inside are three works, with small tabs denoting the begining of each work. Publisher's device to the two title pages, Initial capitals to each work. A smattering of other decorated initials. Lizet, Pierre. Born in Salers in 1482 and died in Paris in 1554. He was a French magistrate, and the first President of the Parliament of Paris between 1529 and 1549. He was a highly educated jurist, and an expert in Canon Law, but his skills in this area have been overlooked due to his theological rantings and fanatical anti-protestant stance. He presided over the "Burning House." This was a French special tribunal, which was established to prosecute crimes against the state. The court was held in a "burning room" so called because the hearings were held in a room hung with black drapes and lit by torches and candles. The most infamous of the Burning Houses was that held in 1547 under Henry II against the Protestants. He allegedly presided over feasts where the hangings and burnings were the highlights of the festivities, carried out after the dessert. He fell from favour in court intrigues, and in 1550 lost his posts. He was appointed Abbot of Saint-Victor until his death.

Sebastian Gryphius learnt the (then new) craft of printing in Germany and Venice, before settling in Lyon. Initially publishing works on Law and Administration. He became a strong part of the Lyon book trade, Interestingly, he was by the 1540's willing to publish and shelter "suspect" authors, including heretics such as Etienne Dolet (later burned as an Atheist / Protestant). Ironic as he was here printing work from a virulently fanatical establishment figure. He died in 1556. There is a street in Lyon named after him. pagination is: [iv], 1-124, 1-234, * 3-154, [ii] pp. *lacks title to the third work, hence starts at pp3. signatures are: [iv], a-p4, [ii], a-z4 A-D3, *a2-t4 [ii] pp.

Condition: Overall this work is in excellent condition for its age. The early boards are a little rubbed, and have a light scratch to the rear board, but overall are in very good shape. The spine is nicely matched, but almost brand new. Unusually, perhaps because of the composite nature of the work, the spine has 6 raised bands, with a gilt decoration to each panel, but no titles to it. Inside, the inside paper is a little chipped, and torn to the boards, but this has been pasted down (presumably when re-backed). The front and rear end papers are a touch nicked and marked - but not badly. The rest of the book is very tidy. There is a small amount of worm damage to the corner of the first few pages. Not affecting text. The pages are otherwise clean. Throughout the text there are quite a few annotations and marginalia in ink. These (including underlining) seem to be contemporary with the work, and are seemingly in Greek and Latin (there are a few later annotations in English in pencil). These don't affect the text.