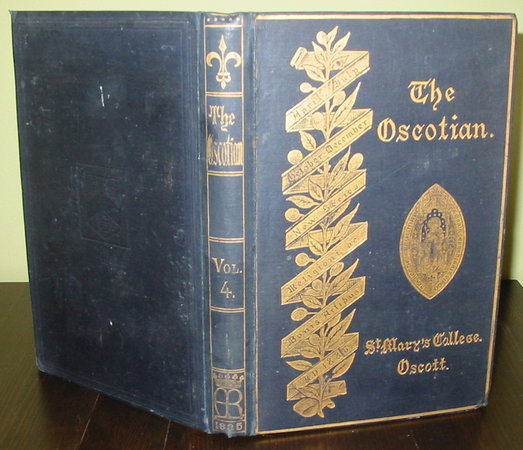 Erdington, Warwickshire: St Mary's College, Oscott, 1885. First edition. A very nice copy of this Roman Catholic magazine. Blue cloth boards, with gilt titles and design. Comprising three issues of the magazine. 13 (misnumbered 12), 14 (June 1885), 15 (November 1885) with three photographic plates (portraits). The reprint / offprint contains two articles - one on "The Oscott Lodges" the other contains two poems by Peter Mowle (an Elizabethan Catholic) and a commentary.
[iv], 1-295, [i]. +12pp
The book is in sound condition. The blue cloth is a little faded and slightly rubbed. There is a touch of bumping to the head and tail of the spine. Internally, the book is clean and tidy, with a little foxing only. Contemporary owner's gift inscription to the inside front board with a library sticker from the South Brent Syon Monastery.
St Mary's College (or Oscott as it is often know) is a seminary training Roman Catholic Clergy. It opened in 1794, and in 1805 ordained Francis Martyn - the first Roman Catholic priest wholly ordained in England since the Reformation. Since this time, it has been under the authority of the Archdiocese of Birmingham. the Chapel at Oscott was created by the eminent Catholic architect Augustus Welby Pugin, who also created the museum and altar (from 1837 he lived partly at Oscott). The college played an important part in the Catholic revival of the mid 19th Century.