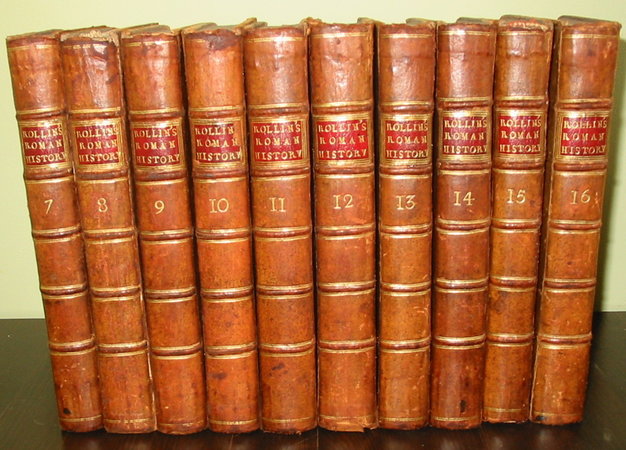 The Roman History from the Foundation of Rome to the Battle of Actium: That is, to the End of the Commonwealth. Volumes 7-12 & Volume 14. (Only 7 of 16)

Each volume has an engraved Frontis (so seven plates). There are also five engraved folding maps (the one of Gaul is hand coloured) and a engraved illustration of Caesar's bridge over the Rhine (both in Volume 12).

Externally, the bindings to these volumes are clean and tidy, but with some rubbing to the leather. The labels are clean, with a touch of nicking only. Volume 12 has a closed tear to leaf A4. Otherwise the books are internally remarkably bright and tidy, with just the occasional bit of foxing / darkening.

Charles Rollin (1661-1741) was a French academic and educationalist, in 1699 he was appointed principal of the Collège de Beauvais. His Jansenist principles led to limits on his progression, and Rollin's literary work dates chiefly from the later years of his life, when he had been forbidden to teach. His Roman history was in much part a compilation, and was a generally uncritical study.