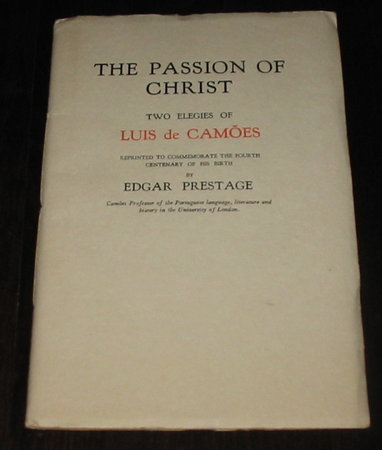 Watford: Edgar Prestage: 1924. First edition. Cream paper covers with black and red titles to the front cover. Sewn binding. Yapped edges. The Foreword is written in English, the Elegies in Portuguese. A very nice copy of this work. The cream covers have a touch of handling only, with no significant markings. Very faint foxing to the rear panel. Internally clean and tidy throughout with the lightest of foxing. A limited edition of 250 copies (not numbered). 32 pages.
Prestage was the Camões Professor of Portuguese at the University of London. As he stated in the foreword: "The two elegies here reprinted have been selected to show him as a Catholic poet." He goes on to claim that Camões vision of the crucifixion "produces a picture of rare beauty." Camões (1524-80) was a Portuguese poet, primarily known for "The Lusiads".