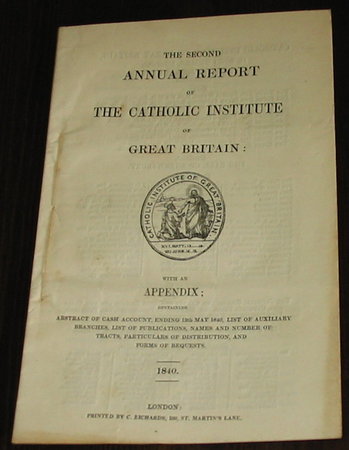 The Second Annual Report of the Catholic Institute of Great Britain: With an Appendix; Containing an Abstract of Cash Account, ending 12th May 1840, List of Auxiliary Branches, List of Publications, Names and Number of Tracts, Particulars of distribution, and Forms of Bequests.

London: C. Richards: 1840. A thin volume, not bound up (as issued) Titles and monogram of the institute to the front cover. Sewn. The list of patrons and the committee, led by the Earl of Shrewsbury, includes Lord Clifford as one of the (many) Vice Presidents. The Catholic Institute grew out of the Metropolitan Catholic Tract Society. The organisation was formed "To protect the rights of Conscience of the Poorer classes of Catholics and to promote the interests of Religion and charity." Irish M.P. Daniel O'Connell was also involved in the establishment of the Institute. Led initially by the Hon. Charles Langdale M.P. 26pp.

Condition: Clean and tidy copy of this work. The pages are almost without mark, and the printing has made a clean, deep impression. Slight darkening to the front cover.