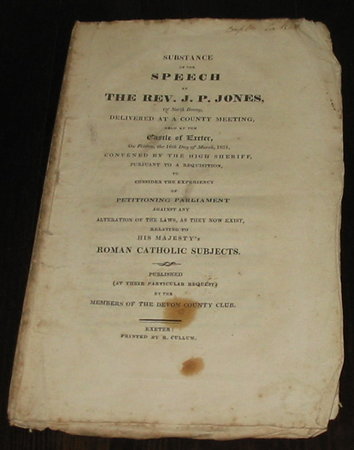 Substance of the Speech of the Rev. J. P. Jones, of North Bovey, Delivered at a County meeting, held at the Castle of Exeter, on Friday, the 16th day of March, 1821 Convened by the High Sheriff, Pursuant to a Requisition, to Consider the Expediency of Petitioning Parliament Against any alteration of the Laws, as they now exist, relating to His Majesty's Roman Catholic Subjects.

Devon County Club / R. Cullum, 1821. First Edition / First issue of this pamphlet. Printed by R. Cullum of Exeter. Sewn. No outside binding. Pages 1-16 are comprised of Jones' speech, and pages 17-24 are notes in favour of Emancipation.
The outside pages (title and rear page - there is no cover) are a little darkened and have some markings to them. A little edgewear to the pages, with slight creasing to the corners. Internally clean and tidy with intermittent foxing only. This copy bears the ownership signature of Captain La Roche. Probably Henry La Roche, of Halberton, Devon. Captain of the Royal Navy and J.P. He had served in various vessels during the wars with France from 1792, obtaining the rank of Commander in 1804 and Post Captain in 1806. He died in Devon in 1832. See Gentleman's Magazine. Vol 102, Pt. 1. 1832. 24 pages.
Although a Church of England curate, Jones (1791-1857) was strongly in favour of Catholic Emancipation. As he put it, he would "rather drag out my existence within the walls of a dungeon, than give up the maintenance of the sacred cause of HUMAN LIBERTY." Such opinions cost him advancement in the church, although the Earl of Shrewsbury eventually gave him a benefice. Jones was born at Chudleigh, Devon, where no doubt he was aware at least of the Clifford family. Jones was also an antiquarian, writing several books on the history, and natural history of Devon.