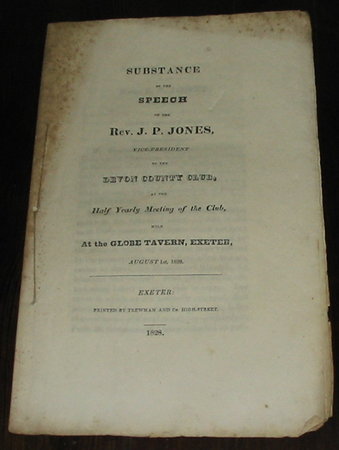 Substance of the Speech of the Rev. J.P. Jones, Vice-President of the Devon County Club, At the half Yearly Meeting of the Club, held at the Globe Tavern, Exeter, August 1st 1828

Exeter: Trewman and Co, 1828. Unbound, sewn. Largely uncut. A speech by Jones in support of Catholic emancipation. COPAC cites only the British Library copy of this work. The outside covers of the pamphlet has marking to the front top edge and side, and to the rear there is an area of marking to about a third of the page. Internally clean and tidy throughout. 1-15 [i]. pp.
Although a church of England curate, Jones (1791-1857) was strongly in favour of Catholic Emancipation. As he put it, he would "rather drag out my existence within the walls of a dungeon, than give up the maintenance of the sacred cause of HUMAN LIBERTY." Such opinions cost him advancement in the church, although the Earl of Shrewsbury eventually gave him a benefice. Jones was born at Chudleigh, Devon, where no doubt he was aware at least of the Clifford family. Jones was also an antiquarian, writing several books on the history, and natural history of Devon.