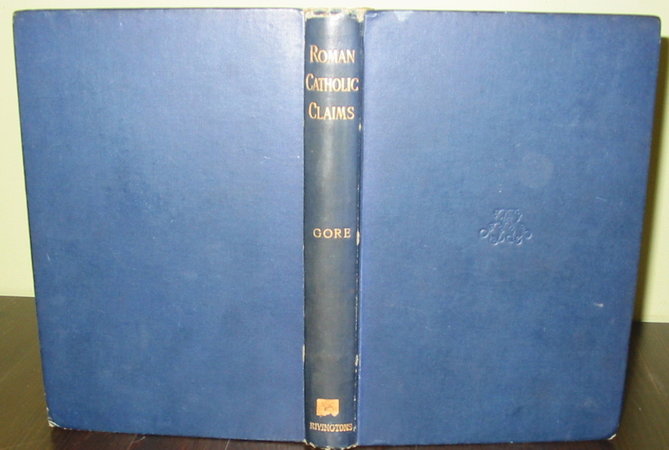 London: Rivington, 1889. Second (revised edition). Although substantially the same work, Gore addresses the issues raised in two Catholic rebuttals of his original work. Blue cloth boards with gilt titles. 32 page catalogue for Rivington publications to the rear. This book is a defence, in popular form, of Anglicanism, and Anglican Ordinations and Sacraments, against the criticisms of Roman Catholic authorities. Gore (1853-1932) was an influential Oxford theologian. He was ordained a priest in 1878, and was the principal of Pusey House from its foundation until 1893. Under his influence, the Oxford Movement moved towards Modernist lines (a break with the Tractarians). He was also very concerned with social action, and he helped to found the Christian Social Union. In 1901 he became the Bishop of Worcester, in 1911 he succeeded Francis Paget as Bishop of Oxford. xviii, [2], 176, 32. pp

Condition: The blue boards are mainly clean, with a little fading and rubbing to the spine. A touch of bumping to the head and tail, with very slight fading. The half title has significant foxing to it. There are two pencil inscriptions showing that the book belonged to a convent library. Owner's name to the head of the title page.