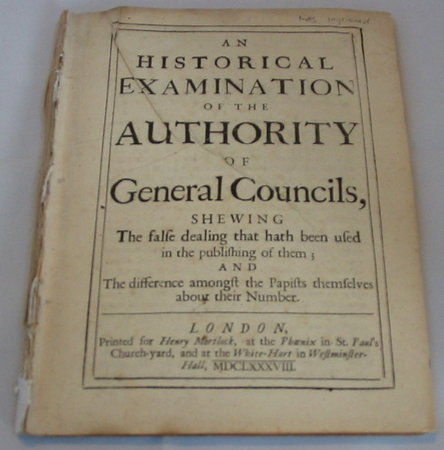 An Historical Examination of the Authority of General Councils Shewing the false dealings that hath been used in the publishing of them; and the difference amongst the Papists themselves about their Number.

London: Henry Mortlock at the Phoenix, 1688. Disbound - The tract / pamphlet argues against the Roman Catholic Church, attempting to demonstrate that the Church had lied about the number and scope of General Councils (those meetings of the Church to solidify doctrinal matters, sometimes called Ecumenical Councils). Lacks imprimatur. Begins with the Title page, the next leaf being A3. Otherwise complete. This is the scarce First edition, with the Addenda p 75-76 and Corrigenda p 76. Robert Jenkin (1656-1727) was a Church of England clergyman. Precentor of Chichester Cathedral and Master of St John's College, Cambridge, he refused the Oath to William in 1688 and thus had to relinquish his preferments, however, he evolved his opinion, and took the Oath to Queen Anne. Title, A3 - L2. Collation: [xviii], 76 pp.

Condition: The pamphlet is obviously removed from a book at some point. The title page is slightly darkened, and has a little creasing to the title. Internally clean and tidy throughout, with just a little darkening to the pages. Overall a clean and tidy work.