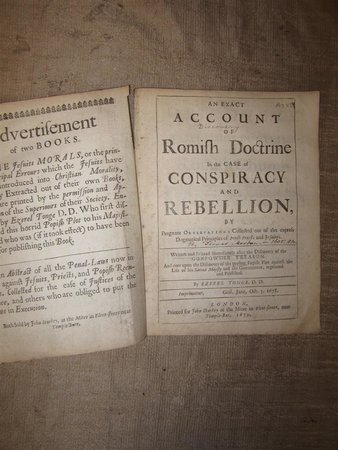 An Exact Account of Romish Doctrine in the Case of Conspiracy and Rebellion by Pregnant Observations Collected out of the express Dogmatical Principles of Popish Priests and Jesuites. Written and Printed Immediately after the Discovery of the Gunpowder Treason. And now upon the Discovery of the Present Popish Plot against the Life of his Sacred Majesty and the Government, reprinted and Published.

London: Ezerel Tonge, 1678. A disbound tract / pamphlet. no covers. Advertisement for further works published by Tonge. Title and 22 pages. A Protestant pamphlet denouncing the Romish Church for their "Rebellious Doctrines". Tonge claimed in the adverts that he was to have been killed following the Popish plot for publishing anti-Catholic books. Ezerel (Israel) Tonge was one of the informants of the Popish plot. He was a Church of England Divine, and virulent anti-Catholic, who met and was influenced by Titus Oates. He arranged with Oates to "discover" his original narrative. Although he had a reputation for madness, and was sidelined as a witness early on in the history of the Popish plot, he was seemingly (if naively) honest in his belief in Oates lies. He was granted a pension by the King. Wing M2839 [iv], 1-22 pp.

Condition: The first leaf [adverts] is partially detached and has some grubby marks on the blank side. The title has an ink annotation (showing Morton's authorship). The text is loosely bound together, has some foxing, and has been cropped with a slight loss to some of the running titles.