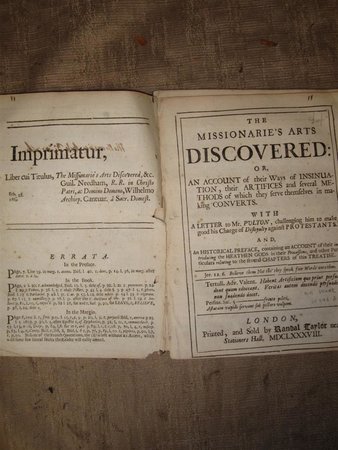 The Missionarie's Arts Discovered: or, An Account of the Ways of Insinuation, their Artifices and Several Methods of which the serve themselves in making Converts. WITH A Letter to Mr. Pulton, challenging him to make good his Charge of Disloyalty against Protestants. And An Historical Preface, containing an Account of the Introducing the Heathen Gods in their Processions, and other Particulars relating to the several Chapters of this Treatise.

London: Randal Taylor, 1688. A disbound work. Imprimatur, Title, Introduction, text. Wing W246A. [viii], xxiv, 1-96pp. Pulton [Poulton], Andrew (1654–1710), was an English Jesuit, educated for the Society at St Omer. He was sent into England in 1687 to teach at the Jesuit school then held in the Savoy, and held a debate in St Martin in the Fields with Thomas Tenison (later Archbishop of Canterbury) who mocked him for his poor English. There were various tracts between the two camps. He was arrested in 1688 but later released, and later became a chaplain to the army of James in Ireland. He died at St Germain in 1710.
Wake, William (1657–1737), became Archbishop of Canterbury. He was originally from Blandford Forum in Dorset, and became a convinced Anglican after spending time in France. He wrote many tracts opposing Catholicism. Wing W246A. [viii], xxiv, 1-96pp.

Condition: Disbound with the remains of a leather spine, the first couple of leaves are detached, the rest of the text is well bound together. The imprimatur has an ink inscription (stating title) and some small marginal losses. The last leaf of the text is a touch grubby, the rest is clean and crisp