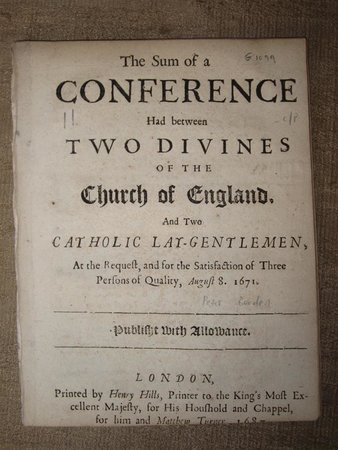 The Sum of a Conference had between Two Divines of the Church of England and Two Catholic Lay-Gentlemen At the Request, and for the Satisfaction of Three Persons of Quality. August 8 1671.

London: Henry Hills, 1687. Disbound, title, text. This pamphlet, almost written in the form of a play, outlines a debate between Peter Gooden and Edward Stillingfleet & William Clagett. It is interesting to see that Gooden was anonymously described as a Lay-gentleman. Although not a Jesuit, he was certainly a "seminary priest". Gooden, Peter (1643–1694), Roman Catholic priest. educated at Lisbon. He spent the end of Charles's reign at Aldcliffe Hall and set up a school here. Under James II he was made chaplain to the Duke of Berwick's Regiment, but after the revolution he returned to Aldcliffe. He had frequent conferences with Anglicans. 'No man', says Dodd, 'was better qualified to come off with reputation in a personal conference' as 'he was naturally bold and intrepid, had a strong voice, a ready utterance, and generally made choice of such topics as afforded him matter to display his eloquence.' (DNB). [1] - 40 pp. WING G1099

Condition: The title and first couple of leaves are detached, the title has been cropped loose in the bottom margin with a slight loss to the date. The text has light browning throughout, the last page is a little darkened and slightly marked.