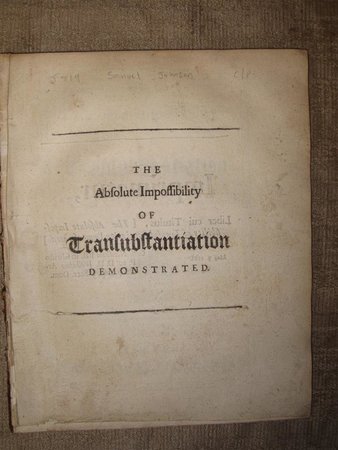 The Absolute Impossibility of Transubstantiation Demonstrated.

London: William Rogers at the Sun, 1688. Pamphlet. Disbound. Half title, imprimatur, Title, preface, text, adverts. No not that one! Johnson, Samuel (1649–1703), Church of England clergyman and pamphleteer, born in Warwickshire. He came to prominence on the publication of "Julian the Apostate" in 1682, which drew parallels between the fourth-century apostate emperor, Julian and James, Duke of York. The tide turned though, and in 1683 he was jailed for Seditious Libel, the text being publicly burned by the hangman. He spent few years in jail, being released in early 1689. This work was published whilst he was a prisoner in the King's Bench jail. [iv], i-xvi, [i], 1-54, [ii]. Wing J819.

Condition: The inprimatur leaf is a little grubby, partially detached and has a closed tear. Apart from a little light foxing, the text is clean and crisp throughout and well bound together, the last page [adverts] has a small tear and is a little marked.