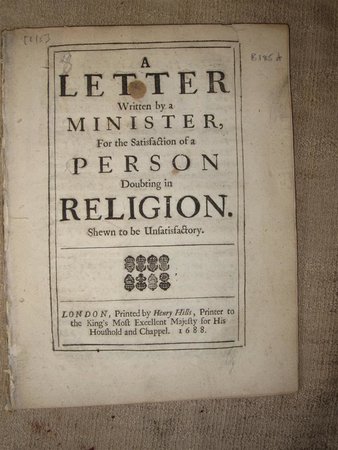 A Letter Written by a Minister, for the Satisfaction of a Person Doubting in Religion. Shewn to be Unsatisfactory

London: Henry Hills, 1688. Disbound pamphlet. Title with vignette. A defence of Catholicism. In two parts - a letter written to a young man (J.W.) who was considering becoming a Roman Catholic, persuading him of the merits of the Protestant church, and then a reply from his Catholic confessor, putting the Catholic case. This is the second edition. (The first being printed in 1686) [viii], 1-38 (I.e. 30) pp. Wing B185A.

Condition: The title has a small tear, a small stain, and is a touch marked. The text has some light foxing in a few places and is loosely bound together. The pagination is complete, and although the collation is complete, the numbering is 1-16, 25-38.