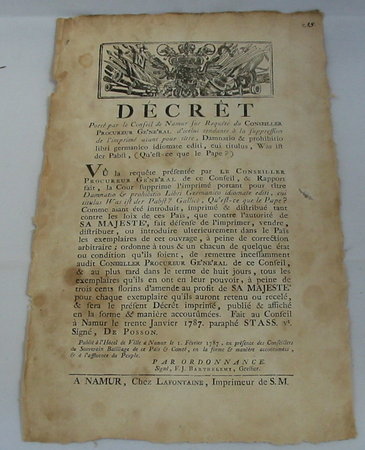 < >
A little backtracking from the Emperor.
JOSEPH II, Emperor.

Namur: Chez Lafontaine, 1787. Two broadsheets / decrees from the Emperor Joseph II. Both are single sheets, printed to one side. Each has a woodcut vignette to the top edge. The first, is a decree, condemning the Papal Bull Damnatio & Prohibitio libri Germanic idiomate editi, cui titulus, Was ist der Pabst The second proclamation from Emperor Joseph II, published 5 months later, making it clear that despite his earlier decree, there is no disagreement with the Bull's content. His decrees "Concerns only the form and the distribution on the said Bull" Both of the decrees are a little darkened, with a touch of nicking to the edges. Overall in sound condition. Produced in the Austrian Netherlands. Belgium (as it is now) was ruled by the Habsburgs for most of the Eighteenth century, before being annexed by the French in 1795. A native of the Southern Netherlands, Josef Sebastian Valentine Eybel (1741-1805) was an enlightenment writer and political appointee. Originally intended as a Jesuit, he became a civil servant, and author of religious texts. He was the anonymous author of Was ist der Pabst / papst - in which he challenged the supremacy of the Pope.