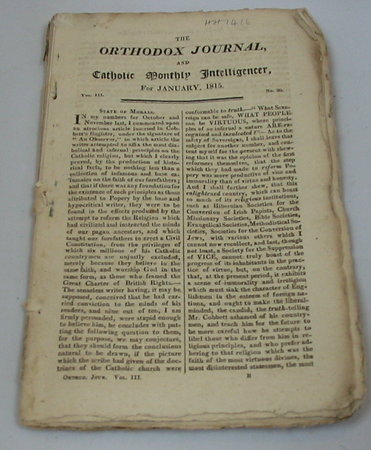 The Orthodox Journal, and Catholic Monthly Intelligencer Voll III. No 20. For January 1815.

London: W. E. Andrews, Red Lion Square, 1815. Disbound journal, a single issue. No covers. Articles on "The State of Morals (In answer to Cobbett's Register", "The continuation of an address to the Laity", "An English Catholic on Petitioning", "Rev. Mr. Martyn on the Nun-baiting order", "Rev. Mr Gandolphy on the Catholic Petition", and several other smaller articles. This was a time of much agitation for Catholic emancipation, and this is reflected in these pages. William Eusebius Andrews (1773-1837) was a Roman Catholic journalist, and editor of several Catholic journals. This work ran from 1813 to 1820, when he was forced to suspend publication, despite support from Bishop Milner. He revived the journal in 1834, and it was continued after his death. Andrews was also the founder of several other (mainly short lived) Catholic journals, and "The Friends of Civil and Religious Liberty", a tract society. 1 - 40pp.

Condition: A clean and tidy copy, without any significant flaws (other than being disbound). Slight edgewear only. The register would suggest that this copy of the journal has come from a larger work.