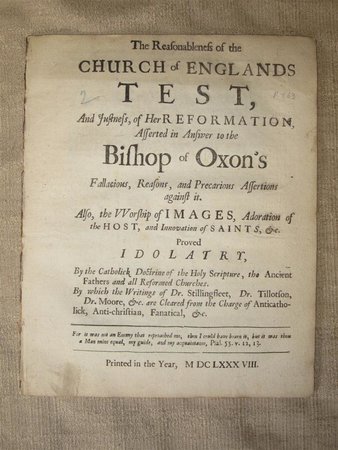 The Reasonableness of the Church of England's Test, and Justness of her Reformation Asserted in Answer to the Bishop of Oxon's Fallacious, Reasons, and Precarious Assertions against it. Also, the Worship of Images, Adoration of the host, and Innovation of Saints &c. Proved Idolatory, By the Catholick Doctrine of the Holy Scripture, the Ancient Fathers and all Reformed Churches. By which the Writings of Dr. Stillingfleet, Dr Tillotson, Dr. Moore, & c. are Cleared from the Charge of Anticatholick, Anti-Christian, Fanatical &c.

London: 1688. An Anonymous pamphlet. Disbound. Title, 22 pages. Presumably published immediately after the Glorious Revolution, and vindicating the Church of England and the Test Acts. The Acts, from 1673 and 1678, aimed at excluding Roman Catholics from public office, by insisting on both a denial of Transubstantiation, and the taking of Communion in the Church of England rite within 3 months of taking office. James II had moved towards suspension and repeal of the Test acts. [ii], 1-22pp. WING R463

Condition: The pamphlet has some light marking. Pages 5-16 are folded at the bottom (where they would otherwise have been longer than the title and remainder of the pamphlet.