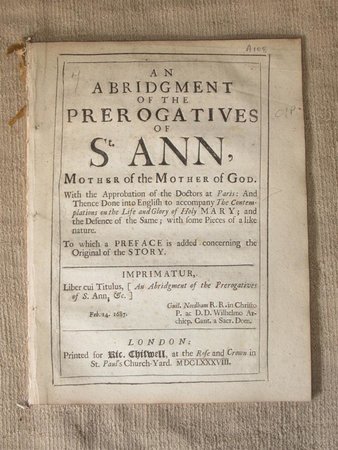 An Abridgement of the Prerogatives of St. Ann, Mother of the Mother of God. With the Approbation of the Doctors at Paris: And Thence Done into English to accompany the Contemplations on the Life and Glory of Holy Mary; and the Defence of the Same; with some Pieces of a like nature. To which a PREFACE is added concerning the Original of the STORY.

London: Ric. Chiswell at the Rose and Crown, 1688. Pamphet. Disbound. Title, preface, a dedication to the Queen Regent (written by "the Maids of St Joseph") the text of the prerogatives. This is in fact an anti-catholic pamphlet from William Clagett. William Clagett (1646–1688) was an English clergyman and pamphleteer, particularly active during the reign of James II. As well as his own pamphlets, he would translate particularly colourful Continental Catholic material, with the aim of making the Catholics an object of ridicule. This is one of those pieces. [ii] i-xv, [i], [vi], 1-20. pp WING A108.

Condition: A nice copy of this pamphlet. Apart from a a few slight marks, the pamphlet is clean and crisp throughout and well bound together.