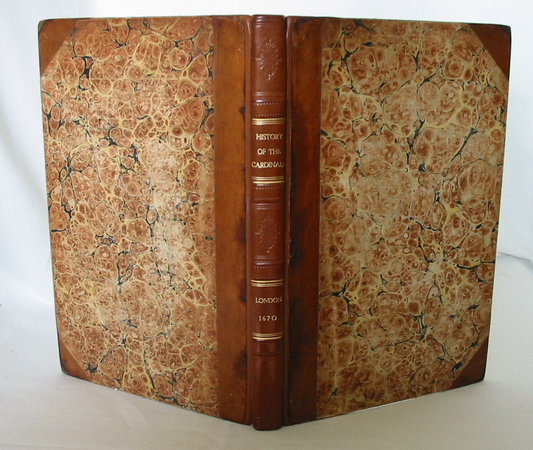 Il Cardinalismo di Santa Chiesa; Or the History of the Cardinals of the Roman Church, From the time of their first Creation, to the Election of the Present Pope Clement the Ninth, with a full account of his Conclave. In three parts

London: J. S. [John Starkey], 1670. Contemporary marbled boards with contemporary leather corners. Recent leather spine with decoration and gilt titles. Frontis illus. of Pope Clement. Title, summary, message to the reader, text. vignette to the head of each of the three sections. A disaffected Catholic wrote this work, which is largely an attack on the Catholic hierachy and the nepotism within it. Initially published in 1668 this is the first English edition. Gregorio Leti (1630–1701) was an Italian historian and satirist from Milan, who sometimes published under the pseudonym Abbe Gualdi. Although a nephew of the Bishop of Acquapendente and Jesuit educated - he later became a Protestant. He was part of the court of Charles II and wrote the first history of Elizabeth. He later offended Charles and was forced to flee the country. [viii], 1-330 pp. WING L1330.

Condition: The spine is immaculate, being very new. The boards are clean and tidy, with a touch of rubbing only. Internally clean and tidy throughout. A little marking to the top edge of the title page, where an owner's name has been removed and another written besides. A part of the book (approx 25 pages) has about 1cm of worm damage to the edge of the page - not affecting text. Overall in lovely condition