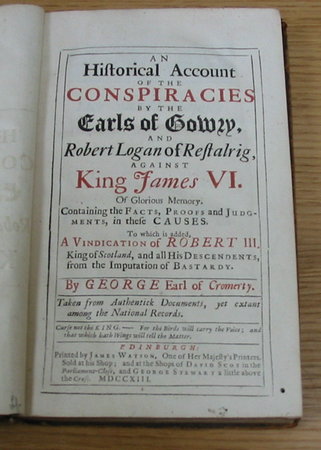 An Historical Account of the Conspiracies by the Earls of Gowry, and Robert Logan of Restalrig, against King James VI. of Glorious Memory. Containing the Facts, Proofs and Judgements, in these Causes. To which is added, A Vindication of Robert III. King of Scotland and all his Descendants, from the Imputation of Bastardy.

Edinburgh: James Watson, 1713. First edition. Original leather binding. Raised panels to spine. Small title label to the spine. Label to the inside board for "Fintry House Library" and another for J.R.P. Forrest. Two parts, first edition, half-title, title printed in red and black. The leather boards are quite rubbed to the edges. Spine has chipping to the edges and top and bottom. Internally clean and tidy throughout. Blank front end paper is 3/4 detached (but holding just). Very slight darkening only. Overall a nice copy. xiv, [ii], 1-127, [i], 1-80 pp. "The Gowrie Conspiracy" refers to one of the mysteries of Scottish history. In August 1600 the King and a large retinue came to Perth, saying that he had been invited there by the Earl's brother, Alexander. A scuffle took place in which the two brothers were killed. Three scenarios have been put forward to explain the events: 1. that Gowrie and his brother, Alexander Ruthven, concocted a plot to murder or - more probably to kidnap - King James VI, and that they lured him to Gowrie House for this purpose; 2. that James paid a surprise visit to Gowrie House with the intention, which he carried out, of killing the two Ruthvens; 3. that the tragedy was the outcome of an unpremeditated brawl following high words between the King and Gowrie, and/or his brother.