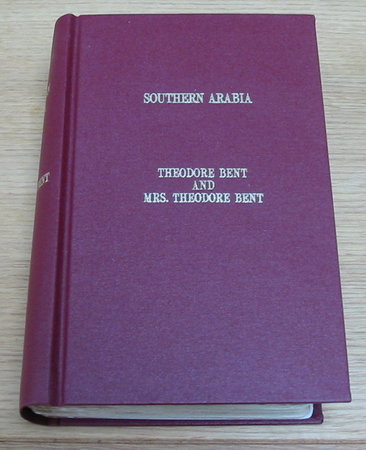 London: Smith, Elder & Co, 1900. First edition, first issue. From the library of the British Embassy at Aden, and bound in burgundy buckram with gilt titles. Complete, with all maps and photographs. The binding is spotless, in good, clean, unblemished condition. The pages are a a little darkened / foxed, and a few are crinkled. There are some library marks, consistent with an embassy library. Overall a sound copy.
, x, [ii], 456pp., [iv adverts], half-title, 6 coloured maps [5 folding], 25 plates [19 photographic].
Theodore Bent and his wife undertook seven journeys from 1893 to his death and added much to European knowledge of the southern Arabian peninsula. The work, which includes a bibliography, is divided into sections on Southern Arabia, Maskat, the Hadramout, Dhorat and the Gara Mountains, the Eastern Soudan, the Mahri Island of Sokotra, Beled Fadhli and Beled Yafei.
It is perhaps surprising that the embassy staff would go to the trouble to remove books such as this from the embassy on evacuation in 1967, in the face of a hostile revolution. The last British High Commissioner had to be lifted out by helicopter under armed guard to a naval carrier standing well offshore. He left behind the first avowedly Marxist state to take the place of Empire, the (People's Democratic Republic of South Yemen).