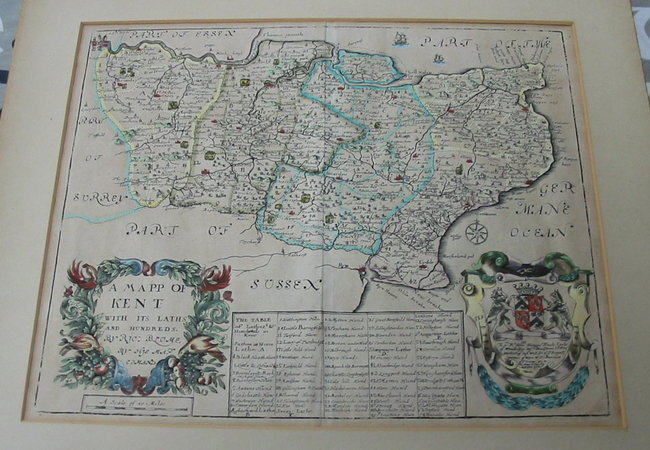 A Mapp of Kent. With its Laths and Hundreds. By his Majesty's Command.

London: 1673. Hand coloured map of Kent with a cartouche of flowers and fruit, being the products of the County, which is balanced by the arms of the Rt. Hon. Heneage Finch, Earl of Winchelsea, Viscount Maidstone, Lord Fitzherbert of Eastwell, Lord of Ye Royal Manor of Wye and Lieutenant of the County. Shows all the lathes and hundreds but no roads are indicated. Map 101/2" x 131/2" board is 15" x 17" Richard Blome (1635-1705) was a cartographer and publisher. Often accused of plagarism, this work appeared in his "Brittannia" in 1673. A smaller edition was later produced in "Speed's Maps Epitomised"

Condition: The colouring of the cartouche and arms are quite well done, but the colouring of the lathes and hundreds is a little gaudy - and is probably later colouring. The map and mounting board are both a touch darkened, but overall in sound condition. There is a very light centre fold to the map.