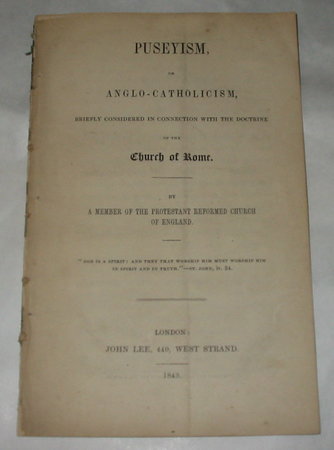 < >
[IRONS, William Joseph]. Attributed. A Member of the Protestant Reformed Church of England

Puseyism, or Anglo-Catholicism, briefly considered in connection with the Doctrine of the Church of Rome

London: John Lee, 1843. A pamphlet (once bound in with other pamphlets). Complete. Title page, Introduction, text. William Joseph Irons (1812-1883) was an Anglican priest and Theolgian. He was a strong defender of Church of England as the Established Church, and argued against seceding from the church (whether to Rome or to the more Protestant churches). He was the vicar of Brompton at the time of the publication of this work, and the introduction is dated Brompton April 1843. He is names by Lawrence Crumb (in "The Oxford Movement and its leaders, a bibliography of Secondary and Lesser Primary Sources") as the probable author of this work.

Condition: The pamphlet now appears disbound, as it has been removed from a collection - but is complete in itself. A touch of darkening to the covers, and a small stain to the bottom of pages 4/5 but otherwise in good clean condition. Now held in an archival wallet.