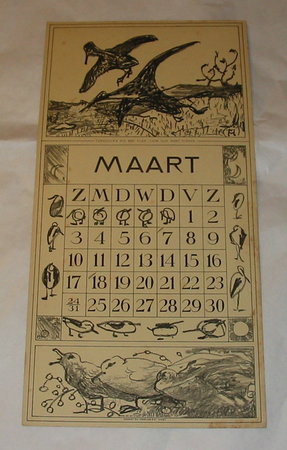 Five Leaves of Lithographic Illustration from his 1918 Calendar

Amsterdam: Five leaves from Hoytema's 1918 calendar, printed by Tresling & Co. of Amsterdam. Juni / Maart / April / Mei / Juli. These sheets were still in preparation on Hoytema's death, and it is a tribute to his popularity that Tresling still published the calendar, even though they are black and white sketches, without the detail, borders or colour. Each plate is 43cm x 21cm (narrow folio format). Each plate is produced by a lithographic technique, signed or monogrammed to the stone. The top edge of each has a fine serrated tooth pattern, where it has been detached from the original calendar. Each of these sheets has a large amount of text in Dutch. These are notes on Chemistry in a detailed hand. Theo van Hoytema (1863-1917) was Dutch illustrator and book designer. He was particularly known for his nature images (more specifically birds). He grew up in The Hague, and afterwards in Voorschoten. He took drawing lessons at the Academy of Art in The Hague, and through his Uncle's contacts, he studied at the Zoological Museum in Leiden.
His first illustrations were published in 1891, "How the birds came to a King" He followed this up with "The Ugly Duckling" in 1893, and "The Happy Owls" in 1895. He married in 1891, but it was not a happy marriage, and did not last. He entered a restless period after the breakdown of his marriage, moving around, and staying for a while with his brother in London. Between 1904 and 1906 he spent time in a hospital, and a sanatorium for neurotics. On release, he lived with his sister in The Hague for the rest of his life. It was during this later period that he made the calendars which made him famous. Theo van Hoytema made 17 calendars. The final one – for the year 1918, was somewhat sketchy, as it was in preparation in the year of his death, and was not completed as a full colour lithograph. There are collections of his work in the Museum Bijmans Van Beuningen, Rotterdam, and the Rijksmuseum & Stedelijk Museums in Amsterdam. There is a road and square / park named after him in The Hague, with a memorial there.

Condition: Each of the sheets are clean and tidy. The serration has been neatly separated, and there are no significant marks to the illustrations. The white rear panel shows a touch of handling only. Maart only, has a touch of darkening / marking to the edge. No other marks apart from the text to the verso. Overall an excellent collection of these lithographic sheets.