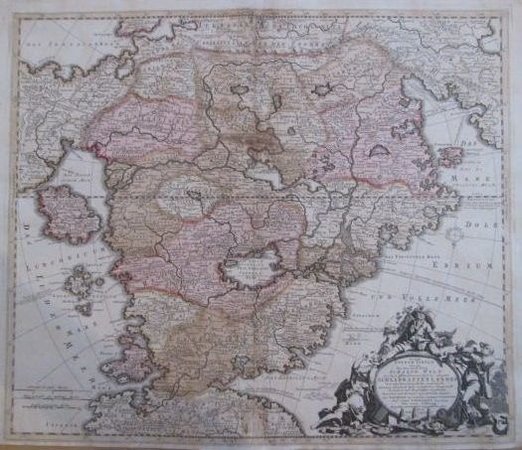 Nuremberg: 1740. Copper engraving by Johann Baptist Homann, with contemporary hand colouring. A rare map of the land of plenty, fools paradise or Pays de Cocaigne. originally published in 1694. The map was printed three times, in 1694, around 1730 and around 1740. This is probably from the last edition, around 1740. Schlaraffenland was the Utopia of German legend. In the children's version of this, sausages grow on trees and tables set themselves. This cartographic version is a much darker version, with a "Kingdom of Extravagance", and "Empire of Fat Stomachs", "Tobacco Island" and the "Land of Gluttony". All of this is surrounded by the seas of Drunkenness and Lust. The cartouche has a scene of debauchery and carnal excess.

The map is in good, clean and tidy condition. The colouring is typical of the German style of colouring. The shading is quite pale / in pastel tones, and I suspect it may have faded over time. The bottom edge of the map has been trimmed quite closely to the engraving (but there is no loss). The rear of the map shows some sign of support / restoration, but on the whole, the map is in good clean condition, with a clear impression. Measures: 480 x 570 mm (19 x 22½ inches).