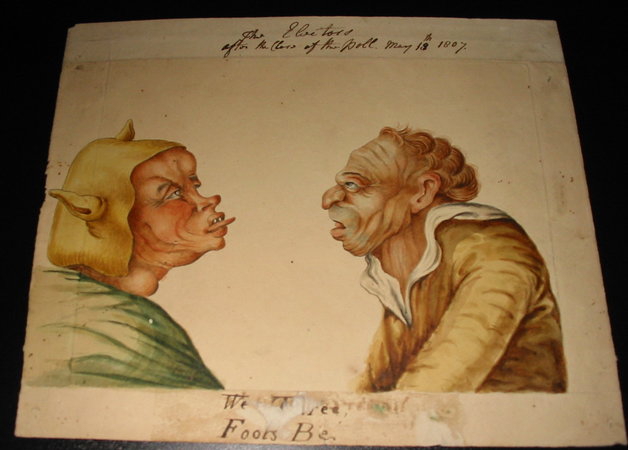 A finely drawn and hand-coloured original caricature - 'The Electors after the Close of the Poll, May 13th 1807'

1807. At the foot is written 'we three, fools be.' The character on the left seems to have a jester's hat on.
On May 13th, 1807, William Wilberforce, Lord Milton, the Hon. Henry Lascelles (afterwards Earl of Harewood), and Mr. Walter Fawkes were nominated as parliamentary candidates in the Castle-Yard at York. This was the first contested election in the seat for 66 years. The struggle was also memorable on account of the vast expense that Lascelles incurred.
William Wilberforce, whose party almost entirely lacked organization, was head of the poll. There were concerns that Wilberforce allied himself with a candidate whose wealth was based on the slave trade, and he was forced to write to the electors to explain himself. Perhaps it is Lascelles and Wilberforce who are mocked as the electors here.
The caricature has been drawn onto the reverse of a scarce caricature engraving, of "Mr Riley in Solomon". This is most probably Samuel William Ryley (1759-1837), actor, and author of The Itinerant, or Memoirs of an Actor, 1808. 208mm x 248mm. Wilberforce, William (1759–1833), politician, philanthropist, and slavery abolitionist. Following the abolition of the slave trade, the Tories called an election. for the first and only time in his career he faced a poll for Yorkshire. Confronting as he did the great wealth and influence of both the Fitzwilliam and the Harewood interests, it was a testimony to the personal esteem in which he was held, and to his effectiveness in representing the county over the previous quarter-century, that he was returned at the head of the poll. It was alleged, however, that Wilberforce had compromised his independence by a coalition with Henry Lascelles, the Tory candidate. Wilberforce denied the charge and defended himself in a published letter to the electors.
He acknowledged that some of his supporters had indeed also solicited votes for Lascelles, but this was without his sanction, and it would have been improper for him to constrain their actions.
Lascelles, Henry, second earl of Harewood (1767–1841), Politician. His family wealth came from the slave trade in Barbados. After being elected twice as MP for Yorkshire, he stood again in 1807 - Lascelles, who was opposed by clothiers threatened by the removal of protection for their trade, and subjected to polemic about his family's slavery interests, was beaten by Lord Milton.
Ryley [formerly Romney], Samuel William (1759–1837), Actor and author.
Educated in Kensington & Fulham, although apprenticed to the woollen trade in Yorkshire, he eloped with his master's daughter and the married at Gretna Green. He was a jobbing actor, who later won a little more fame with his autobiography. "Ryley's life exhibits, with painful clarity, the precarious existence of the supporting actor of his day—snatching, at one moment, at dreams of fame and, at the next, facing the reality of poor shelter and meagre rations" (ODNB). This caricature seems true to life, as he was described as being very thin.

Condition: Some marking to the edges. Lower lettering has at some time had a paper slip pasted over it, now detached but with some paste marks. A touch of marking / handling. Overall in very good condition.