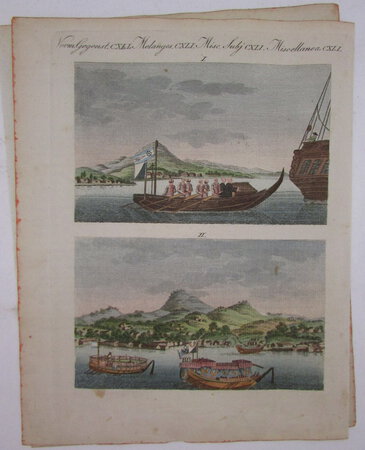 1800. Two items. An original hand coloured copper engraving with two images of the coast of Japan with ships in the foreground. Also a full sheet of text, printed on both sides (one side is in German and the other in French). Sheet size for both is approx. 24.5 x 19.3 cm (image: approx. 9 x 14.5 cm). Translation of the text in to English:
Japan is a country that has only been better known for two hundred years and consists of several large and small islands on the north-east coast of Asia in the eastern great ocean, and because of its great wealth, especially in gold and other products, it has been an object of the Become European greed. The Portuguese settled here in the middle of the 16th century, but abused the goodness of the Japanese and were driven out by them. Since then only the Dutch have been allowed to trade in Japan, albeit with great restrictions; but the British failed two attempts that they made because of this.
The latest Russian venture of this kind also failed. In 1803 the Russian court sent the two ships under the command of Capitan v. Krusenstern were sent to make a trip around the world, including an envoy to Japan. This envoy, however, was not admitted to the audience, and the gifts he had brought with him were not accepted.
From the, by the captain v. Krusenstern 's masterful description of his journey around the world, the following two views are borrowed from Japan:
Fig. 1.
View of Megasaki near the city of Nangasaki in Japan, where the Russian ambassador was assigned his apartment, and the first visit of the Japanese interpreters, who are approaching the Russian ship in an open sloop, of which we can only see the rear.
Fig. 2.
The Russian envoy takes two boats or sloops, one of which is splendidly decorated, to the apartment in Megasaki assigned to him. Here we can get to know not only the design of the Japanese vehicles, but also the clothing of the Japanese.

Condition: Both in a very good condition. Engraving is blank to verso.