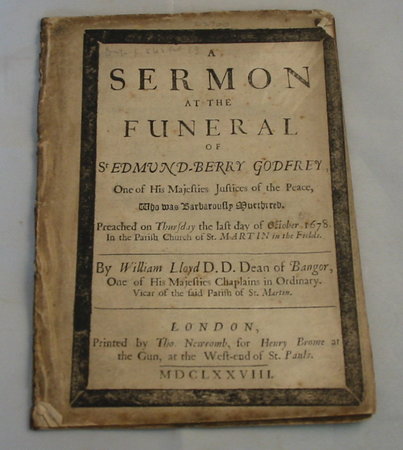 A Sermon at the Funeral of Sr Edmund-Berry Godfrey One of his Majesties Justices of the Peace, Who was Barbarously Murthered. Preached on Thursday the 1st day of October 1678. In the Parish Church of St. Martin in the Fields.

London: Tho. Newcomb for Henry Brome: 1678. Disbound sermon. Paper covers. Title, with black funereal border. Anti Catholic sermon preached at the funeral of Lloyd's parishioner, Sir Edmund Berry Godfrey, the justice of the peace to whom Titus Oates made his first depositions concerning the Popish Plot. Shortly thereafter, he was found mysteriously murdered in a ditch on Primrose Hill. This led to the arrests of several Catholics - and was the beginning of the hysteria of the Popish Plot. It would appear, in hindsight, that Oates himself was involved in the murder, and that its aim was to bolster support for his anti-Catholic allegations.

Condition: There is a touch of nicking to the corners of the paper cover. The cover is darkened - the rest of the sermon is clean and tidy. A sound copy.