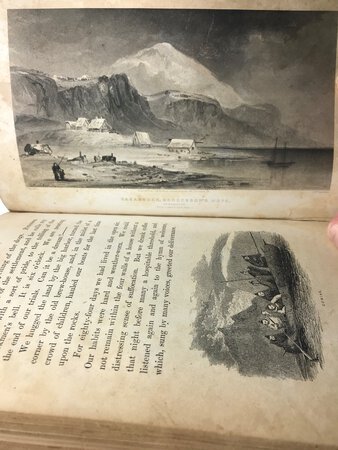 Philadelphia: Childs and Peterson, 1856. First American edition of the Grinnel expeditions in search of Sir John Franklin. Two volumes. Full leather binding. Illustrated in over three hundred engravings from sketches by the author: the steel plates executed by the superintendence of J.M. Butler, the wood engravings by Van Ingen & Snyder. These are both in text and full page with tissue guards. Absolutely fascinating book with glossary of terms, (who knew there were so many words for how the sea looks against the sky)? Includes illustrations of ice formations, polar bears, indigenous peoples etc. 464 + 467pp. 220 x 150 mm (8¾ x 6 inches).
There is rubbing to the binding, a starting of a split to the spine of one volume. The bindings are a little shaken. Internally darkened / soiled, with some marks. The first gather of Volume 1 is a little loose. There is possibly a title page lacking, as there is only the engraved title to Vol. 1. One of the plates in Volume 1 (Bear Hunt) has some areas of loss. Overall in good / fair condition.
Elisha Kent Kane was an American explorer, and a medical officer in the United States Navy during the first half of the 19th century. He was a member of two Arctic expeditions to rescue the explorer Sir John Franklin.