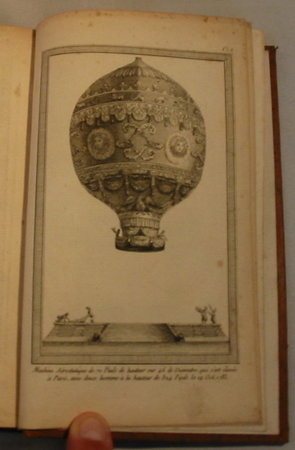 Paris: Chez Cuchet: 1783. Fairly recent French full leather binding, with gilt titles and decoration to the spine. Barthélémy Faujas de Saint-Fond (a French geologist & traveller) produced this work in 1783 as the Montgolfier brothers were conducting their experiments. This is the revised edition of the book - with a supplement and further information about the brother's experiments in June-September 1783. There is a brief supplement to the rear adding information about the flight of November 21, in which Pilâtre de Rozier, accompanied by the Marquis d'Arlandes, made the first aerial voyage in history - this last flight is often recorded in engravings as the first flight over Paris. There was a second continuation volume issued in 1784. 9 engravings (number 5 is the frontis illustration). Frontis, xl, 1-299, [vii] - 8 plates.

Condition: The leather binding is in good clean and tidy condition, with just a touch of bumping to the corners. Internally the book is in very nice condition, with just the odd foxing spot, although these are more prevalent to the beginning, and the title page is significantly spotted.