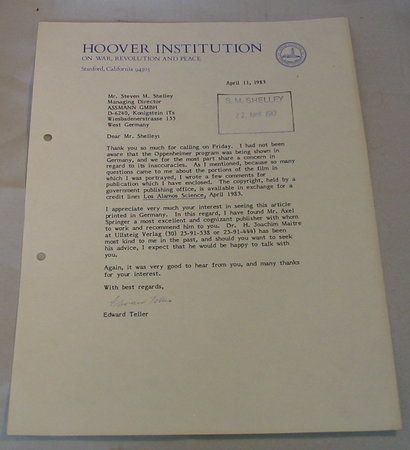 TLS to Steven Shelley about an Oppenheimer television programme

Hoover Institution, 1983. A single A4 sheet, of headed paper bearing the monogram and address of the Hoover Institution on War, Revolution and Peace. Dated April 11th 1983. The letter is from Edward Teller, to Steven Shelley of Assmann Gmbh. In the letter, Teller mentions concerns about innacuracies Edward Teller [1908-2003], was a Hungarian-American theoretical physicist who was born in Hungary, and is known colloquially as "the father of the hydrogen bomb", although he claimed he did not care for the title. He was an early and important contributor to the Manhattan Project, and was later allegedly the inspiration for the character of Dr Strangelove in the eponymous film. He was largely ostracized by the scientific community, after criticising Oppenheimer during the latter's security hearings in 1954, which led to Oppenheimer's security clearance being revoked. He remained a strong advocate of nuclear power (both civil and military) which often led him to be seen as a "mad scientist" particularly as so many members of the Manhattan Project came to regret their involvement. He was a co-founder of Lawrence Livermore National Laboratory (LLNL).
The Hoover Institution (now part of Stanford University) was established by Herbert Hoover in 1919. It states its aims as "the Hoover Institution seeks to improve the human condition by advancing ideas that promote economic opportunity and prosperity, while securing and safeguarding peace for America and all mankind."
Steven Marius Shelley, [born 1920] Chancellor Order Knights of Malta. President Hungarian Foundation for Victims of Multiple Sclerosis Scientist and Hungarian-American businessman. At this time was Managing Director of Assmann Gmbh.