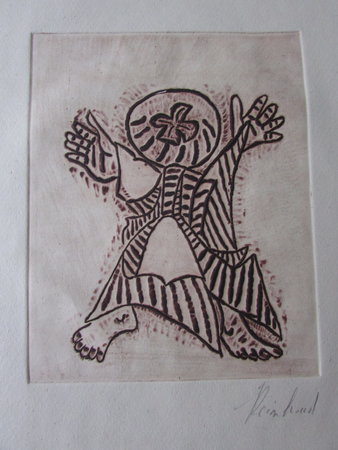 Amstelveen: AMO: 1994. Leporello-folding in cloth cardboard box by Phoenix. Number 8 of 31 numbered and signed copies on Hahnemühle, printed by Rob Cox. With six signed etchings by Reinhoud D'Haese. First edition. Very good. 17pp. The colophon to the rear is also signed by Reinhoud and de Coninck.

Dimensions: Book size 38 x 25 cm., box size 40 x 26.2 x 2 cm. Reinhoud D'Haese 1928-2007) Originally from Grammont in Belgium, he spent most of his life living just outside Paris. From 1947 to 1951 Reinhoud studied at L'Ecole d'Architecture et des Arts Decoratifs in Brussels, during this time he was also apprenticed as a Goldsmith. He was introduced to the CoBRa movement, by his friend and colleague Pierre Alechinsky, with whom he shared a studio for many years, and was also one of the first to move into one of the two COBRA houses in Brussels. He participated in several COBRA exhibitions, including the final show in Liège in 1951. Primarily a sculptor, he also worked as an illustrator and artist.