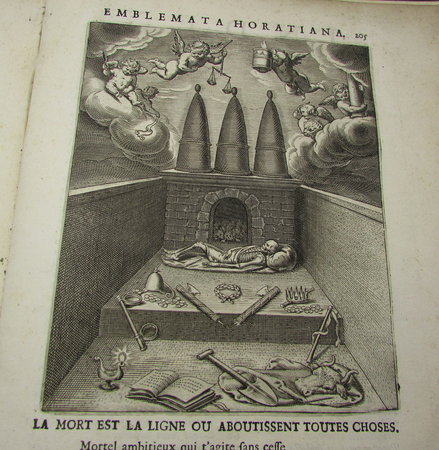 Bruxellis [Brussels]: Franciscum FOPPENS Bibliopolam sub signo Sancti Spiritus: 1683. Full 18th Century brown leather binding. 6 raised bands to the spine. half-title, title-page in red and black with engraved vignette, engraved portrait of Veen on page [vii]. 103 engraved emblems with mottoes & stanzas in French below each plate and verses in Latin, Italian, Dutch and French on verso of preceding plate. A Otto van Veen (1556 - 1629) also known by his Latinized name as Octavio Vaenius, was from the Netherlands. He studied with various European artists before settling in Brussels, where he was court painter to Alexander Farnese, Duke of Parma until 1592. He continued to work for various members of the European aristocracy, and his later work turned to scenes of battles and later books of emblems. He produced the painting for these engravings and the work was published in 1607. In this 1683 edition the engravings are attributed by Nagler and Bryan to Gijsbert van Veen (1558 - 1630), Otto's brother. [viii], 250 [206 - 207 index, 208 blank] pp.

Condition: The binding is a touch rubbed, and the hinges are cracking to the front and rear boards (still very strong - surface cracking only) The binding falls open to page 1. The gilt titles and ornamentation to the spine have faded considerably. Slight darkening / toning to the pages. A couple of tiny nicks and fractional chips to the odd page edge - but none significant. The engraved plates are beautifully pressed with good clean impressions.