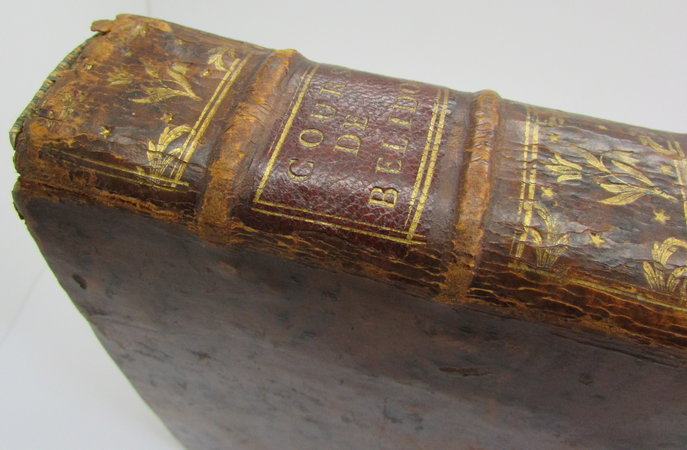 Paris: Chez Nyon, Fils, Quay del Augustins: 1725. Contemporary full leather binding, with 6 raised bands to the spine. 5 panels decorated with gilt devices, and the 6th with a burgundy and gilt label. Marbled end papers. Complete with 34 folding plates. There is a curious vandalism to the title page and dedication page. An early owner has crossed out the name of Le Duc du Maine, who the book was dedicated to, and has coloured in portions of the Duc's crest. In the same ink is written "La livre ma coute 15 denier" (my book which cost 15 denier). To the following page (the dedication) again the Duc's crest has been defaced, along with his name, and several of the titles which pertained to him. The Duc was the legitimised son of Louis XIV, but despite this, was disliked by many who still considered him a bastard. Belidor (1698 - 1761) was a Frenchman born in Catalonia, an artillery professor at La Fère, whose work on artillery, engineering and hydraulics was widely disseminated in the 18th century. (24),560,(32) pp

Condition: The boards and spine are clean, A little bumping to the head and tail of the spine, with a touch of the cover rubbed. Inside, the book and plates are clean and tidy other than the sabotage to the Duc!