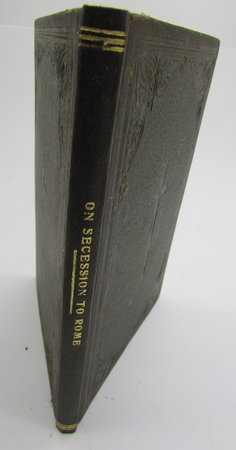 Certainty Unattainable in the Roman Church A Consideration bearing upon Secession to Rome.

London: Seeleys: 1851. First edition. Original dark brown, blind stamped buckram with decorations and a cross to the front and rear of the boards. The spine has been recently repaired with fresh gilt titles to the spine. The traditional anti-Catholic fare, with chapters on infallibility, the Saints, the Sacraments and Transubstantiation. A very clean and tidy copy with fractional darkening to the pages. 19cm x 14cm. An Anglo-Irish Protestant from Limerick, who had to move to England as he was so unpopular in England, Seymour spent his life writing Polemics against Catholicism. In 1844, having recently married, he went on a long journey to Rome with his wife. Several books against the Roman church followed - this being one of them. He died in Bath in 1874.