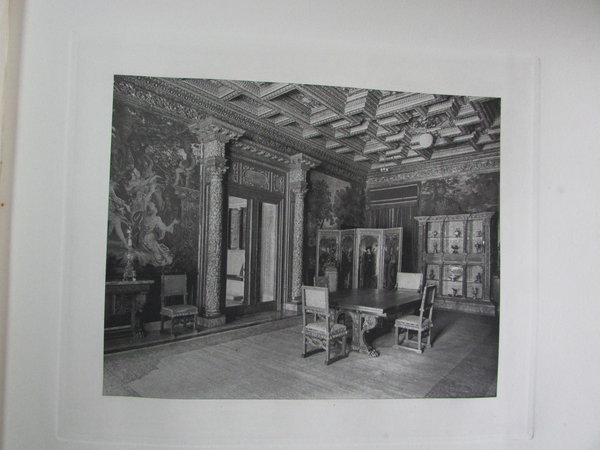 New York: William Salomon, 1912. Three-quarter vellum over paper-covered boards with title in gold on cover. Fore-and bottom page edges untrimmed, as published. The book is a complete photo-documentation of William Salomon's gorgeous mansion (which has since been demolished), located on New York's Fifth Avenue. Profusely illustrated with reproductions of plates in photogravure. Photographs by Lillian Baynes Griffin, who was the wife of the American Impressionist Painter Walter Griffin (1861-1935). Each plate protected by a tissue guard. A little marking to the cream covered boards, but not too much. Internally clean and tidy throughout.
410 x 310 mm (16¼ x 12¼ inches). No Pagination but 56 photogravures each with blank verso. William Salomon was an American financier and one of the managers of the New York firm Speyer & Co. In 1902 he founded the banking-house William Salomon & Co. He was very active in railroad finance and has contributed a number of articles on financial and other topics to the magazines of the day.

Condition: A little marking to the cream covered boards, but not too much. Internally clean and tidy throughout.