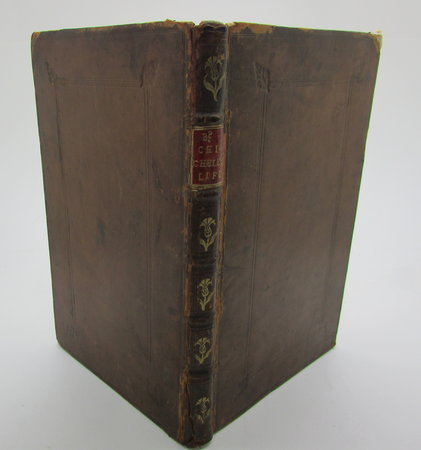 The Life of Henry Chichele, Archbishop of Canterbury, Who lived in the times of Henry the V. and VI. Kings of England. Written in Latin. Now made English. And a Table of Contents Annexed

LondonL Richard Chiswell: 1699. Old, but not contemporary full leather binding. 6 raised panels to the spine, with gilt panels and label. Bookplate to the inside board. Frontis illustration of Chichele (by M Burghers). A small ink annotation to the ffep shows that the book was purchased for 2 S. 6 d. in 1699 (12.5 pence). 8vo. First edition. Although shown by Duck as almost a Saint, and presented as a Protestant before the Reformation, for his arguments with Pope Martin, a modern view would look at Chichele as a lawyer and diplomat who protected his various prebends and livings at every chance, and who, whilst working to prevent schizm in the Church and Papacy, was nonetheless prone to personal arguments with the popes. The work is dedicated to Archbishop Thomas - this was Thomas Tenison, Archbishop of Canterbury at the time of writing. Henry Chichele (1364-1443) from Northamptonshire became Archbishop of Canterbury and founded All Souls College, Oxford. Arthur Duck, was a Fellow of All Souls. 178, [xxii] pp. Expanded, first English language edition (originally published in Latin in 1617.) ESTC R236 (Wing D2430).

Condition: The binding is in a good clean condition. A little rubbing to the binding edges. still holding well. Internally, generally clean and tidy, with a touch of darkening to the end papers. slight water damage to the edge of the last two leaves (not affecting text).