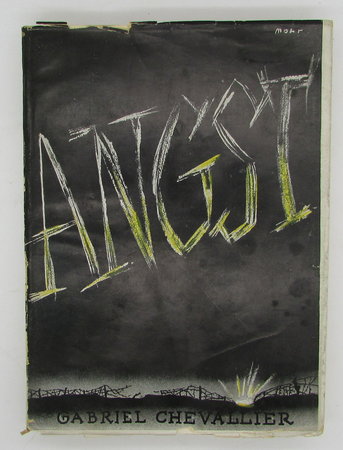 N.V. De Arbeiderspers: Amsterdam: 1937. First Edition Thus (Dutch translation). Softback with paper wraps showing a period illustration of No Man's Land by Mohr. This work, first published in 1930 under the original title La Peur shows strong autobiographical elements. It tells the story of a young man, who inspired by the euphoric mood of France in 1914, signed up to fight. Chevallier wrote about trench warfare with an honest, open, but also bitter undertone. It is appropriate that the work was published by Arbeiderspers - the Dutch Socialist publisher. This copy was from the archives of the publisher, and bears a stamp to this effect on the half title page. In later editions, the work was entitled 'Heldenangst' - 'Heroic Fear'. The paper wrappers are a little nicked to the edges, and there is creasing to the paper on the spine. Internally, the book is clean and tidy throughout. Many pages are uncut. 284pp.