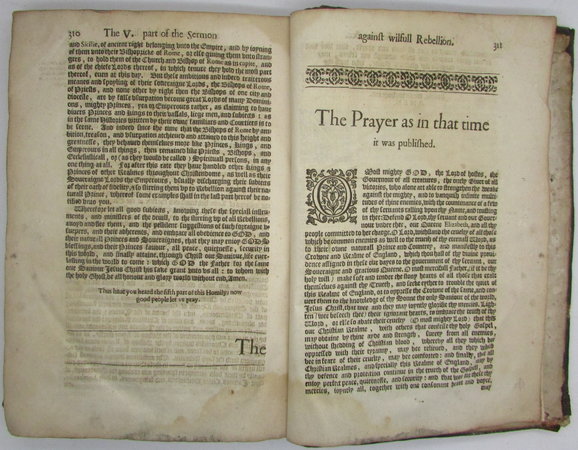 Certaine sermons or homilies, appointed to be read in churches : In the time of the late Queen Elizabeth of famous memory. And now thought fit to be reprinted by authority from the King's most excellent Majesty. [Bound together with] The Second Tome of Homilies, of Such Matters as Were Promised and Entituled in the former part of the Homilies.

London: John Norton for Joyce Norton: 1633. A nice copy of this two volume work, unfortunately lacking the title page to Volume 1. The volume starts on gather A. Original full leather boards, with a touch of bumping / edgewear to the boards. Recent spine with titles and date to the spine. There is a little water staining to the work, particularly to the edges, and a slight nicking to the edges of the blank front end paper. Some darkening / foxing, again particularly to the edges. Owner's inscriptions to the inside front board and to the 2nd end paper. (I think what is laid in as the first end paper is a later addition, when the spine was replaced - the 2nd end paper appears from condition and inscriptions to be the original one). Also lacking is leaf 3I2 (page 99/100) with the text here also lacking. Bizarrely, a full page plate, dating from 1814 has been laid in to face page 275. This is an engraving by Wm Craig and L. Brown, showing national liberty crushing the nations of Europe. This is perhaps laid in here as it is opposite an homily against Disobedience and Wilfull rebellion. This long homily, published in various forms, is important, as it was part of the celebrations following the failure of the rebellions against Queen Elizabeth. To the end of the work is "A thankesgiving for the suppression of the last rebellion." 1-98, [vi], 1-98 101-320 [iv].