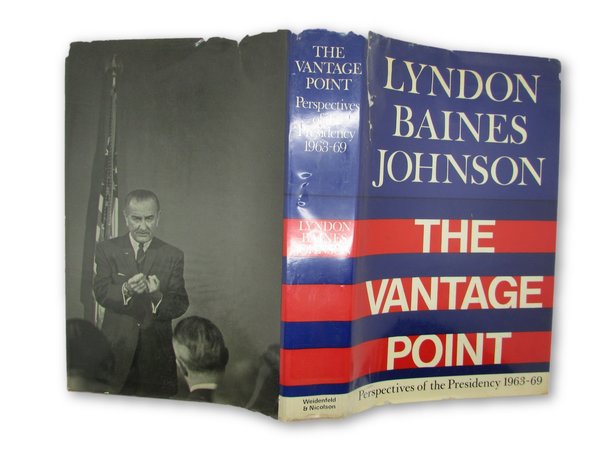 London: Weidenfeld, 1972. First UK edition. A lovely association copy (of sorts). From the library of Lord Harold Davies of Leek, with a tipped in TLS from Sir Harold Wilson to Lord Leek. The letter is a single sheet, on House of Commons note paper, and refers to his studying Cabinet memoranda during the summer recess of 1978. The book itself, in original blue and red dust wrapper. Red cloth with gilt titles. In addition to the letter from Wilson, there is the ownership signature of Rt Hon Lord Davis of Leek PC to the ffep. There are also some interesting marginalia, some are just penciled ticks or references, others more significant. For example he contradicts an American statement by Johnson with the comment "This was known when I went to Hanoi" Lord Leek was a Labour MP, and Wilson's PPS, who undertook a peace mission to Vietnam at Wilson's behest. His "secret" mission was revealed before he arrived, to the fury of the Americans, and led to him being ignored by Ho Chi Minh. His mission is referenced in this book p581. 24x16.5cm. 630 pages.

Condition: dust wrapper is good, a little rubbed and some closed tears internally taped. Now held in an archival sleeve. The book is in very good condition.