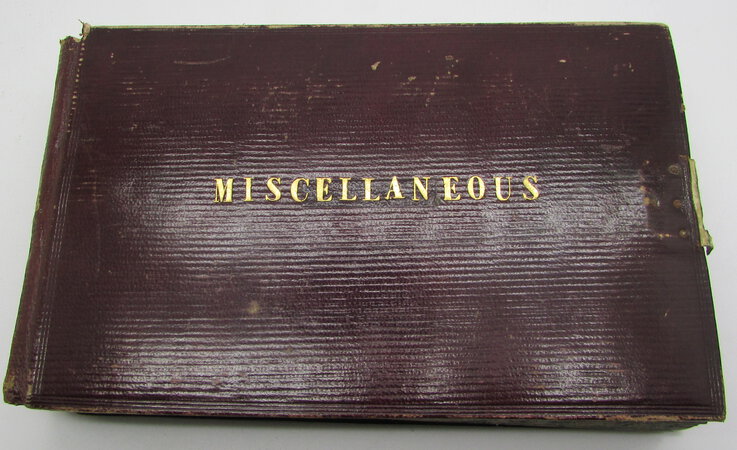 < >
An original volume relating to inheritance provisions for his children
HOWARD, Henry, Charles

NA, 1839. HOWARD, Henry Charles, 13th Duke of Norfolk (1791-1856). An original volume relating to inheritance provisions for his children, 1841. Sixteen pages, with the remainder of the volume unused. It is headed: "Information connected with the Norfolk Family Settlement at the 31st May 1839." It notes annuities to the Earl of Surrey £10,000, Countess of Surrey £1,000 and detailed provisions for other members of the Duke's family, includingthe Earl and Countess of Arundel & Surrey, and their younger children Lord Edward (Fitzalan) Howard, Lord Bernard Fitzalan Howard, Lady Mary Howard and Lady Adeliza Howard, born in the early 19th century. There are also references to The Glossop Estate, and settlements in 1841. An annuity to Dr Sandon and his wife is mentioned, as is a re-settlement agreed on the date of the Duke of Surrey's marriage. Full contemporary straight grain dark red morocco, gilt lettered 'Miscellaneous' on the upper cover. Slight wear to the head of the spine, and lacks the clasp. It bears the engraved stationers' label of Bebbington's Bath Paper Warehouse, 426, Strand. 120 mm x 190 mm. Henry Charles Howard and his father were Roman Catholics, although his mother Lady Elizabeth Belasyse was Anglican. It is not clear if Howard was formally and nominally raised Anglican, or if he was already Catholic when he married into a prominent Whig (and therefore anti-Catholic) family in 1814. In 1829, after Catholic emancipation, the Earl of Surrey (as he now was) was elected a Member of Parliament. In 1839
his son, Henry Granville Fitzalan, Fourteenth Duke of Norfolk, married Augusta Lyons, the daughter of Admiral
Sir Edmund (afterwards Lord) Lyons, the ambassador at Athens. This necessitated a revision of his father's inheritance provisions.