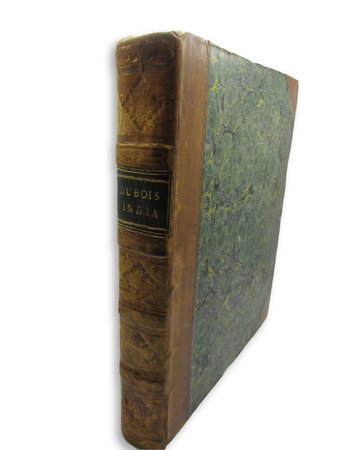 Description of the Character, Manners, and Customs of the People of India; and of their Institutions, Religious and Civil. Translated from the French Manuscript

London: Longman, Hurst, Rees, Orme and Brown, 1817. First edition 4to, Bound in late 19th century half calf, marbled boards. A little light spotting to extremities. Title on spine. A very good copy. The book bears the owner's signature of T.J. Powell, Brecon. This would seem to be the Welsh composer and conductor Thomas James Powell.
xxvii, [1, blank], 565 pp. 270 by 210mm (10¾ by 8¼ inches). Although translated from the French, this was the 1st Edition. A Classic analysis of Hindu society. Jean-Antoine Dubois, 1765-1848, French catholic missionary, sailed in 1792 to India where he spent twenty-seven years, serving first in Pondichery, then at Mysore and Mangalore. He abjured western society, dressed as a Sanyasi, and became a vegetarian. In 1827 he returned to Paris where he was appointed head on the Missions Étrangères. This book, one of the first classic analyses of Hindu society, soon became a standard work and a kind of manual for the Indian Civil Service. It is now known that a substantial portion of the work was plagiarized from the writings of a French Jesuit, Father Gaston-Laurent Coeurdoux, who worked in south India from 1732 to 1779 and was himself a noted Indologist.

Condition: A little rubbing to the binding, which has been restored. Book is in very good, clean condition, with a touch of foxing to the initial pages.