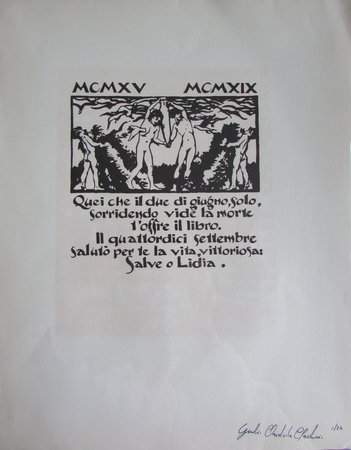 Milan: L'Eroica (Ettore Cozzani), 1922. Giulio Aristide Sartorio was an Italian painter and film director from Rome (1860-1932). His period of greatest renown came at the beginning of the century, when he produced decorative friezes for the 5th Esposizione Internazionale d'Arte of Venice (1903), the Mostra Nazionale of Fine Arts (Milan, Parco Sempione, 1906) and Palazzo Montecitorio in Rome (1908–12). Wounded during World War I, he travelled extensively in the Middle East, Japan and Latin America during the 1920s and became a member of the Italian Royal Academy.

This is #1 of 24 relief etchings on zinc with woodcut effect. Signed by the artist.