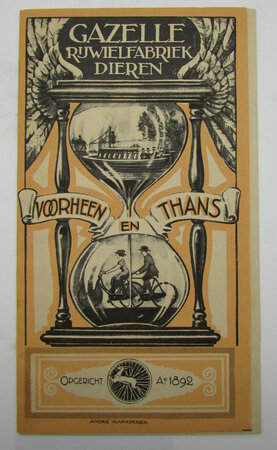 Dieren: Gazelle Rijwielfabriek, 1920s. From 1899 to 1905, Vlaanderen worked on the Ed Cuypers architectural firm. He set up on his own and worked on many advertising assignments for various companies. For several decades, André Vlaanderen was the graphic designer for the Gazelle bicycle factory. In 1925, he developed the Gazelle logo, which the company still uses today. During the 1920s and 1930s, he was also the author of several small advertising comic books for Gazelle.