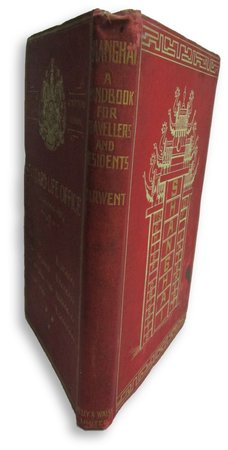 SHANGHAI; A handbook for travellers and residents to the chief objects of interest in and around the foreign settlement and native city

Shanghai, Hong Kong, Singapore & Yokohama: Kelly and Walsh Limited. First edition, printed in 1904, of this important early guide book. With numerous photos and period advertisements. It was the first city guide on Shanghai published in a foreign language, and - at the time - was a very useful source of information about Shanghai, though mostly focussed on the foreign settlements. Black ink mark to front cover. Light wear to spine ends but tight and clean copy. The inside is clean and in a very good condition. Lacks the original map to the back pocket.
[x], xx, 221, [xxiv] pp. A fascinating insight in to China at that time - with everything from guidance on the price of hiring a sampan or a rickshaw, to 'handy' phrases in Pidgin-English! It represents a certain view of the city; through the eyes of a Western resident in the early 20th century.