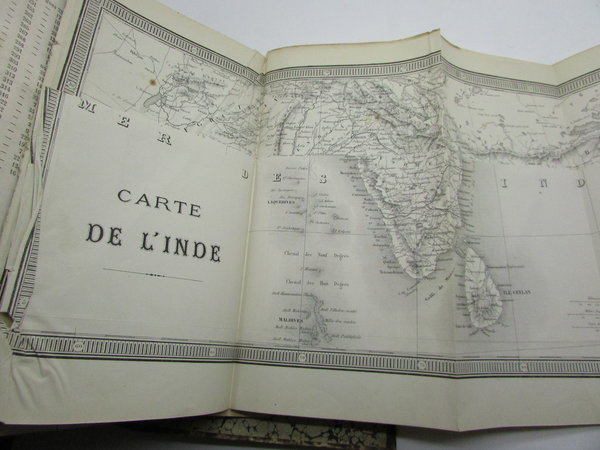 Paris: Librairie de la Societe Bibliographique, 1874. Contemporary green leather spine with gilt titles. Marbled boards with green accents. A picture of the first attempts made by the French to establish their domination in India. Martin's generous efforts; the works of La Bourdonnais; the rivalry of it with Dupleix; the recall of La Bourdonnais; the admirable labours of Dupleix, so badly supported by the government of France; the struggles of his successors and the final failure.
xi, 504 pp.
240 by 160mm (9½ by 6¼ inches). George Bruce Malleson was born in Wimbledon (UK). Educated at Winchester, he obtained a cadetship in the Bengal infantry in 1842, and served through the second Burmese War. His subsequent appointments were in the civil line, the last being that of guardian to the young Maharajah of Mysore.

He retired with the rank of colonel in 1877, having been created C.S.I. in the 1872 Birthday Honours. He authored the biographies of the Mughal Emperor Akbar, the French governor-general Dupleix and the British officer Robert Clive for the Rulers of India series.

Condition: Title page has small ex libris stamp. Some water staining / foxing throughout. Large fold-out map (47 x 39 cm) to the rear has become detached, a little creased, but otherwise in a good condition.