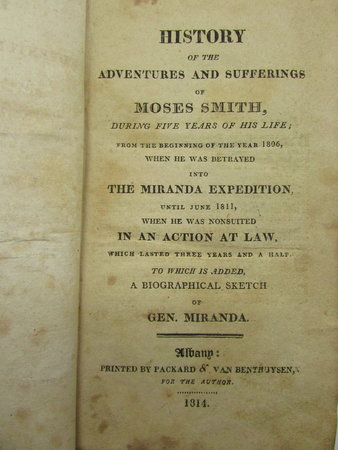 History of the Adventures and Sufferings of Moses Smith during five years of his life; From the Beginning of the year 1806, when he was Betrayed into the Miranda Expedition, until June 1811 when he was Nonsuited in an Action at Law which lasted three years and a half. To which is added a Biographical Sketch of Gen. Miranda

Albany: Packard & Van Benthuysen for the author, 1814. 2nd edition. iv, 13-146, [6]. pp. 2 engraved plates. Contemporary calf. "one of the few contemporary narratives relating to the Miranda expedition." Moses Smith was a native of Huntington (born 1785). First edition was published in Brooklyn in 1812. 175 by 115mm (7 by 4½ inches). General Francesco Miranda enjoyed a successful military career before he decided to revolutionize South America. The crusade was a disaster. Smith and tow comrades escaped from prison in Carthagena and were rescued at sea.

Condition: Pages 19/20 have damage to the outside margin, with loss of text. Foxed and a little darkened. Owner's name to the first blank and rear end paper. Slight rubbing / splitting to the top edge of the spine.